I’ve been calling the bracelets below “my royals”, but in writing about them, I thought that “royal” should have more connotations that simply referring to a king, queen or other sovereign. My search for the truth, however, kept ending on sites pertaining to the Kansas City Royals. This was not what I was looking for. The term is used in phrases such as “he’s a royal pain in the . . . “ where it means extremely bad. It can also be used to mean excellent as in “let’s give them a royal welcome.” I was also amused to learn that royal can indicate a stag with large antlers that have 12 or more points on them. I wonder what The Royals in England think about that definition.

Unfortunately my royals are not full of the crown jewels and they aren’t sparkly, but at the least, the one on the right is shaped like a crown. Ok . . . so I’m stretching it just a bit. Give me a break!

The “princess” bracelet on the right of the above photo is made from a combination of two of my etsy tutorials, the dimensional bracelet and the woven bracelet. I wanted a new shape in the middle and this tiara form emerged. I put in the stones, but felt it still needed something; therefore I added the weaving. I think it could be done with bright crystals and more elaboration, but I’m just a simple gal. 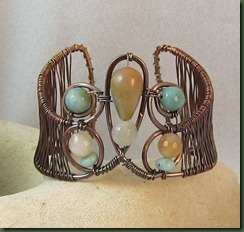 The “queen” bracelet below sports a star at the middle top and is adorned with lots of turquoise and some carnelian. It is the cursive style bracelet that just ended up with a little extra width and more dramatic swirls. I guess this one is fit for a Texas queen.

My final assumption about “royal” is that the term can stand for extremes or outliers, whether they are good or bad. England’s Royals are outside the norm in status; The Kansas City Royals hope to be the same when they play ball, but may sometimes give their owners a “royal pain” and as for my bracelets . . . time and customers will tell.

Unique jewelry creatively made with care at The Ranch in San Marcos, Texas